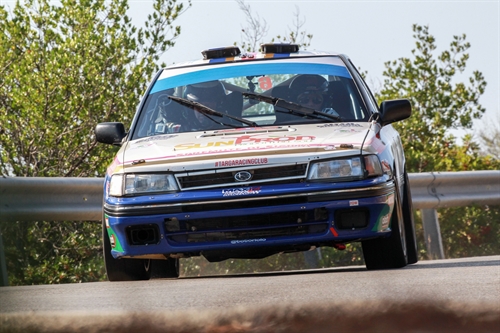 The Sicilian driver, already winner on 2014 with an Audi, took the lead from the first special stage
Highly race for the local drivers, led by Bettini-Acri, to debut with a Lancia Delta Integrale, sixth overall and fifth of the 4th group.
Capoliveri (Isola d´Elba, Livorno), 21 September 2018
The Sicilian Salvatore Riolo, codrivered by Alessandro Floris, with a Subaru Legacy, are leaders of the XXX Rallye Elba Storico-Trofeo Locman Italy, the classic event of the European and Italian Historic Rally Championship, in progress since yesterday afternoon, seventh and penultimate round of the season for both championships.
Riolo, who won the Historic Rallye Elba on last 2014 (with Audi Quattro), taken the leadership from the first SS last night. Then, not leave it anymore, managing to resist the attacks of strongest competitors with his thunder japanese cars.
At the end of the first day of competition Riolo holds the ranking with 10" in front of Lucio Da Zanche, and Daniele De Luis (Porsche 911 RSr) and the overall podium is completed by "Lucky", with Fabrizia Pons on a Lancia Delta Integrale, first of the registered crews of the FIA European Championship. The attic of the ranking is occupied by all cars of the 4th group, with "Lucky" delayed last night during the first Stage due to a gearbox problems. Highly performance for local drivers, led by Bettini-Acri, to debut with a Lancia Delta Integrale, sixths in the general and fifth of the 4th group.
Today, Elia Bossalini, with his Porsche 911 SC, make an important progression from eight starting position to the fourth at the end of the leg. Misfortune for Walter Pierangioli (Ford Sierra Cosworth): during the last stage he retired for gearbox failure, when he was fifth overall.
The third group is for Porsche 911 SC trio. The first is the Austrian family Wagner-Wagner, second also for the "continental" classification. Second provisional are Mannino-Giannone and third the Tuscans Marcori-Innocenti, slowed down last night by a bad tires choice. Also, great performance of another local crew, Volpi-Maffoni (Volkswagen Golf GTI), fourth in the group standings.
It is already close to the minute, the leadership Salvini-Tagliaferri, with their green Porsche 911 RS, in the second group. He is in front 51"9 to Bertinotti-Rondi (Porsche 911 RSr), slowed down by several errors. Third is the Scandinavians Johnsen-Johnsen, also with a Porsche 911 Carrera RSr.
The first group is for Dall´Acqua-Galli (Porsche 911), near of the "three coloured" title, which already have almost three minutes ahead of Parisi-D´Angelo (Porsche 911), and third are Giuliani-Sora (Lancia Fulvia HF).
Great show for the first stage of the A112 Abarth-Yokohama Trophy, The first "battle" won to Scalabrin-Marin, with 16 "1 on Fiora-Beretta and third the locals Galullo-Pellegrini to 46" 2. Unlucky Sisani-Pollini, stopped by the clutch during the fourth SS and also Battistel-Rech, retired for ignition.
This morning it is also a challenge for the two regularity contests, the famous "Graffiti" and the "Regular Regularity", also with the tricolor title, supported by a beautiful, typically summery day.
The second and final leg, tomorrow Saturday 22 September, will start from Capoliveri at 08.00. There will be other four SS, with the final arrival in the center at 3.00 pm. The stages will be "Volterraio-Cavo" (Km 26,650), "Lacona" (Km 9,470), "Nisportino-Cavo" (Km. 11,340) and "Buonconsiglio-Accolta" (Km. 14,900).