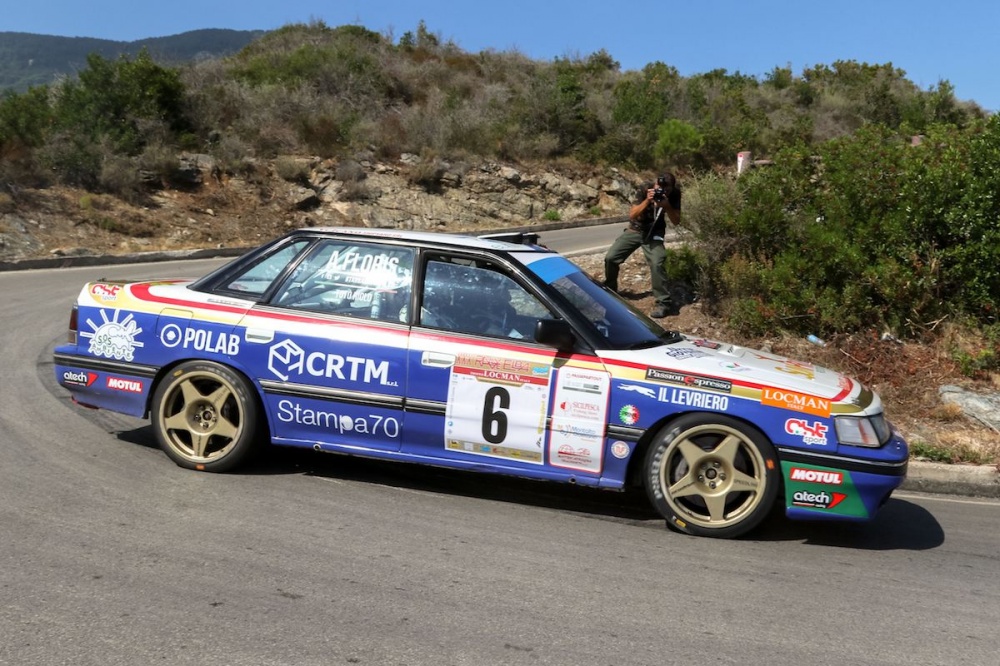 The eclectic driver from Palermo had already closed the first stage of yesterday in command of the standings despite the shudder of a puncture in the final of the day, and then get to sweat cold in the first few beats today due to a problem with the turbine, which during the inaugural "chrono", the 26 kilometers of the classic "Volterraio" had relegated him in second place behind Lucio Da Zanche (Porsche 911 SC). Then, misfortune for Da Zanche on SS7: he lost about 40 " delayed set-up problems bar, cause that he slipping to third place, behind also the reassuring "Lucky" (Lancia Delta Integrale).

Riolo then recovered the lead of the race and masterfully mastered the situation by repeating the success achieved in 2014 with the Audi Quattro, as well as winning the fourth group, and the second final position is for "Lucky" and Fabrizia Pons. For them a race suffered, due to gearbox problems for the entire two legs.

Da Zanche closed third overall and the local Francesco Bettini-Luca Acri at their debut with a Lancia Delta Integrale, are fourth in the general classification and in the 4. group, "crystalline" performance with the sign the best time in the last two stages.

The third group confirmed the trio of Porsche 911 SC on the podium that he had commanded in the first leg. Karl Wagner and Gerda Zauner, the rally family are the winners, with their yellow Porsche 911 Sc, second also for the continental classification behind "Lucky". Second place for the palermitans Mannino-Giannone and third the tuscans Marcori-Innocenti, constantly in crisis with the tires choices.

The other tuscans (from Siena) Salvini-Tagliaferri, with their green Porsche 911 RS, took the second group. Second overall are Bertinotti-Rondi (Porsche 911 RSr), slowed down yesterday by some mistakes. Third are the scandinavians Johnsen-Johnsen, also with a Porsche 911 Carrera RSr.

The first grouping has won by Marco Dall´Acqua, with Galli (Porsche 911), with just over three minutes ahead of Parisi-D´Angelo (Porsche 911), and third - and even more detached - Giuliani -Sora with the Lancia Fulvia HF.

The great show of the A112 Abarth-Yokohama Trophy, after the first round of yesterday won by Scalabrini-Marin, the second challenge of today has already won by the driver from Vicenza Marostica. He won the 2018 Trophy Edition.

× nomobilesi - DetectMobile: no (stile mobile: mobilesi && session windowwidth: )
cookie
close
We use cookies
The website uses its own and third-party technical cookies and marketing cookies or other third-party tracking tools, only after obtaining the user's consent, also with the transfer of personal data to countries outside the European Economic Area (EEA, i.e. EU + Norway, Liechtenstein, Iceland). Closing the banner implies consent to only the necessary technical cookies. Closing the banner implies consent to only the necessary technical cookies. If you want to learn more about the topic, you can consult the complete information.
Cookie Policy - Privacy Policy
technical necessary
Technical and necessary cookies help make a website usable by enabling basic functions such as page navigation and access to protected areas of the website. The website cannot function properly without these cookies.
marketing and advertising
Marketing and advertising cookies are used to track visitors on websites. The intention is to display ads that are relevant and engaging for the individual user and therefore more valuable to third party publishers and advertisers.
Cookie settings
Accept the selected cookies
Accept the necessary cookies
Accept all cookies