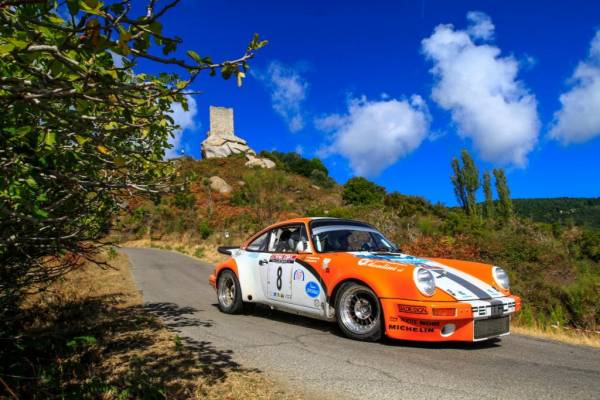 XXV RALLYE ELBA STORICO-TROFEO LOCMAN ITALY:VICTORY FOR MONTINI - OGNIBENI (PORSCHE 911)
The victory of the crew from Brescia arrived with a strong attack on the last two Special Stages after two days of great entertainment.
On the podium also Salvini (Audi Quattro) and Negri (Porsche 911).
The race was supported by a summer temperature and by a frame of public for special occasions.
Three days of competition and fourteen Special Stages, have decreed the Brescians Nicholas Montini and Michele Ognibeni (Porsche 911) as winners of the XXV Rallye Elba Storico - Trofeo Locman Italy.

The race, organized by ACI Livorno Sport, tenth round of the European Historic Rally Championship and the penultimate of the Italian Championship, took place between the evening of last Thursday and the afternoon of today, had again the headquarters in Capoliveri.

The event, also as a vehicle for the promotion of the territory, has had it very exciting and spectacular, to the delight of many fans came to see the Island of Elba to continue the tradition of one of the world´s most popular rallies.

The victory of Montini, age twenty-five from Sabbio Chiese near Brescia flanked by Ognibeni, have reached with the culmination of the race in detail with the last two stages. The chronicle of the 2013 edition tells of a comparison exciting sporting and uncertain, with seven changes of leading. On Thursday evening, the other Brescian "Pedro" (Lancia Rally 037, European Champion and defending race winner of 2012 edition) was the first to take the lead, then from the second to the third stage he commanded the green Porsche 911 by Luigi Marchionni paired to that of Lucio Da Zanche, only to see the latter take the lead at the end of the first leg, after having bent the strength of "Pedro" that only for the sixth round was able to get back in front of everyone.

This morning, the leader Da Zanche was plagued by clutch problems, then sunk in the standings for a puncture (PS 11). At that point Alberto Salvini took the lead, in his second race with the Audi Quattro. When the driver of Castelnuovo Berardenga seemed well on track to victory there´s a new twist: he has suffered the initiative of the young Montini who meanwhile had settled in second place after a very high quality performance. A strong attack in the two final stages has allowed the young driver to capture a significant achievement, one that has sealed his first overall victory won at the first year of experience with the spectacular coupé from Stuttgart.

Salvini then finished second while David Negri Biella (Porsche 911) finished in third place, lingered for about 2 ´ suffered a puncture during the sixth special stage yesterday and today upgrading himself in his first Rallye Elba.

Enrico Brazzoli (Lancia 037) finished in fourth place, lingered on SS 8, the last of the first stage, by a puncture to which the driver reacted specifically with a decidedly crystalline performance today which allowed him to stay behind the Norwegian Walter Jensen, at the start with a similar car Martini design, concrete memory of the roaring years of rallies around the world.

Bad luck for many crews, as "Pedro", stopped with gearbox problems and the transmission to the start of the SS12, or Matteo Musti (Porsche 911) that did not smile, lingered heavily in the opening of the race and sunk in the standings for problems with a coil, while those with a comeback attempt to enter the inhibited even in the top ten absolute.

In the First Grouping CSAI holds the chip lead Luigi Zampaglione (Porsche 911), also first in the Category 1 of the continental race, the Second Grouping CSAI went to Montini, the Third Grouping Austrian Wagner (Porsche 911, also a winner in the category of 3 ´ European), after he had finished the first stage command Raoul Marco Domenicali (Porsche 911 SC), then stopped today. Returning to the reading of the race in key European, Sweden´s Mats Myrsell, who was also a Porsche 911, lead Category 2 while Salvini won Category 4.

Notable performance, with peaks of true spectacle, by Giuliano Calzolari from San Marino (Ford Escort RS), eighth in general (ahead Da Zanche) and first of the "two liters", and also the unforgettable Champion Federico Ormezzano with Talbot Lotus 2.2, applauded by the public, as it was the first of Elban drivers, Marco Galullo, with a Lancia Fulvia HF.

Montini also won the Porsche-Michelin Cup and Tiziano Nerobutto after the winning in race 1 (on this Event each leg have a separate classification for both stages) of A112 Abarth Trophy, won also race 2. Lisa Meggiarin won the overall classification of the 2013 Trophy.