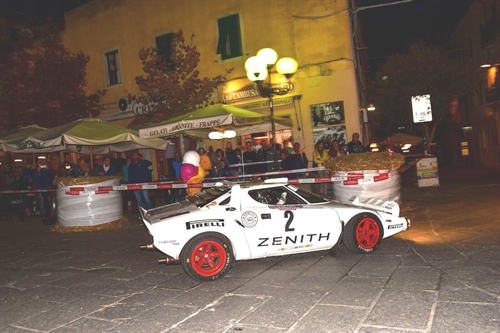 XXIX Rallye Elba Storico-Trofeo Locman Italy: the first leg for the french Comas-Roche (Lancia Stratos)
Great show, last night and today on the Elban roads, for the first stage of the race.

The frenchman Eric Comas and Yannick Roche, with a Lancia Stratos, are the leaders of the XXIX Rallye Elba Storico - Trofeo Locman Italy. After the first six special stages, between yesterday evening and today, the transalpine crew took to the lead from the fourth SS, overcoming the Lancia Delta Integrale 16V of "Lucky"-Fabrizia Pons.
Comas is also leader of the second group, Lucky, in the fourth and for now the third overall is the Lucio Da Zanche with De Luis, with Porsche 911 RS.
Fourth provisional place for Elia Bossalini, side by side with sicilian Granata (Porsche 911 SCrs), stalled last night, in some mistake, precious time spent and fifth are Salvini-Tagliaferri (Porsche 911 RS).
In the third group, the austrian Karl Wagner (Porsche 911 SC) and the tuscan Gian Marco Marcori (Porsche 911 SC) are fought so hard: the transalpine is in front of the competitor for 9"4.
The first group is firmly for Dell´Acqua-Paganoni (Porsche 911S), with over two minutes on Parisi-D´Angelo (Porsche 911S) and three on Giuliani-Sora, Lancia Fulvia HF.
The best of local drivers is Andrea Volpi, with a VolksWagen Golf GTI, codrivered by Maffoni. Already since last night, they have taken the general attention with high-ranking speedy performance, always inside the top ten. Now are in twelfth position, behind Wagner and Marcori in the third group.
In the spectacular A112 Trophy, the fastest is Giorgio Sisani, but out of rank because he does not use the official tires, so officially the first is the piedmontese Cochis.
Tomorrow, Saturday, September 23, the great final leg, with four additional stages: the challenges will start at 08.30 and the final arrival, always in Capoliveri, from 14.00.