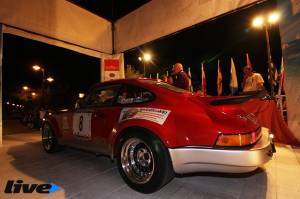 A great audience in Capoliveri for the village stage.
XXII Rallye Elba Storico-Trofeo Locman Italy: Da Zanche is the first leader
A Ceremonial start with the National anthems of all the drivers´ nations, then straight to the competition with two special stages. The driver from Valtellina leads Salvini by just one second.

At 21,30 this evening, from the seafront of Marina di Campo, the XXII Rallye Elba Storico-Trofeo Locman Italy set off, the eighth round of the European Historic Rally Championship and also eighth round of the Italian Historic Rally Championship. The first section of the event comprised two stages and the overnight regroup in Marina di Campo from 23,20. The event was followed by a great audience, to greet the eighty crews which started: in Capoliveri, for the premiere of the village special stage. The rally once again enjoyed the close embrace of the crowd, whether fans or not, and the drivers gave their best.

After two stages the standings are led by Lucio Da Zanche, codriven by Cirillo, on a Porsche 911. The driver of Scuderia Ateneo, after tying the first stage, "Due Colli", with his team mate Salvatore Riolo (Porsche 911), had the best time on the second one, Capoliveri, reaching the overnight regroup of Marina di Campo 1" in front of Antonio Salvini (Porsche 911) while Luigi Marchionni is third at 6". Riolo is only fourth, after losing 13" from the leader on the second stage due to tyre problems. Da Zanche leads Group 2, Giuseppe Alfonzo (Porsche 911) is in front in Group 3 while Luigi Zampaglione (Porsche 911) is ahead in Group 1.

Amongst the important retirements, the Porsche 911 of Andrea Stefanacci, on the first stage.

THE "LIVE REPORT" OF THE COMPETITION
Like last year, 2010 will also see the live web report of the event days. It will be possible to follow the rally in front of a computer, thanks to the cooperation with the www.rallyrevival.itc website which will insert he news together with the press room.
This is the link: http://www.rallyrevival.it/eventi-live-rally-elba-storico.