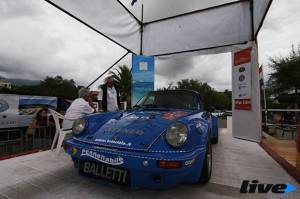 XXII Rallye Elba Storico-Trofeo Locman Italy: The first day is for Riolo (Porsche 911)
The event, yesterday evening and today, saw the duel between the driver from Sicily and Da Zanche.
A remarkable sporting spirit shown by the crews, on a superior level itinerary.

Salvatore Riolo, codriven by Loris Robba, on a Porsche 911 of team Ateneo, is the leader of the XXII Rallye Elba Storico-Trofeo Locman Italy, which saw the first of the two legs run between yesterday evening and today. Riolo fought the whole day against team mate Lucio Da Zanche, with Cirillo, on another Porsche 911.

A great duel between the two crews which swapped places on top of the standings, sometimes tying up. After five stages they had the same total time, when Riolo complained of carburetion problems on the Monte Perone stage and then tried to increase the pace from stage 6 onwards, ending day one with 17" on his rival, while Luigi Marchionni (Porsche 911), with Lizzi, is currently third.

The overall podium reflects the standings of Group 2, while Group 1 is led by German driver Walter Pfeiffer (who went in the lead two stages from the end of the day), with a Porsche 911, only 4" ahead of Antonio Parisi (Porsche), who had a small "hit" on the front of his car during the last stage. Luigi Capsoni is third with his Alpine A110. This group saw Luigi Zampaglione hit trouble, losing time because of the throttle cable, just like De Luca because of his intercom.

Leadership in group 3 is for Giuseppe Alfonzo (Porsche 911), with a margin of 1´28" on Luca Ambrosoli (id.), with Nicola Patuzzo (id.) third at 2´16". Remarkable performances for Ernst Harrach, with his Mitsubishi Lancer, and of Piero Carissimi with his Opel Kadett GTE, while Marco Domenicali has missed out on a good position after losing time towards the end of the day due to a throttle cable problem on his Porsche 911.

Other remarkable drives were performed by Marco Savioli, always in the top positions, and of Paolo Ciuffi, on his debut with "historic" cars driving a Porsche 911. He suffered getting used to the gearbox, but posted some great stage times.

Amongst the main retirements the Porsche 911 of Andrea Stefanacci on yesterday´s first stage for a clutch problem. Today Perangelo Rossi did not start stage 4 for transmission problems when he was 16th overall. Bitter rally also for Antonio Salvini, stopped on his Porsche 911 towards the end of the last stage due to an engine failure, after suffering gearbox problems (when he was aspiring to a high rank) and for Giovanni Galleni, stop after SS 5, for overheating problems to his Opel Ascona 400´s engine.

CAPOLIVERI, A VILLAGE . . . TOTALLY RALLY
After yesterday evening´s stage, followed by a large audience, Capoliveri still keeps the rally spirit high. This evening a celebration for participants and fans alike. The main village square will host an exhibition of historic cars and in piazza Matteotti there will be a review of photos and objects "Capoliveri and the Rally history". The local produce market "Arcipelago a Km 0" and several local bars and restaurants will offer the local cuisine both in the traditional and the revisited forms.
The crews which took part in SS 2 "Capoliveri" will be rewarded, starting from 22,00, with important prizes for the best times on the 4 km against the clock, to the first local crew, the first mixed male-female crew and the most unlucky crew on this stage.
In the "Graffiti" event, of Sport regularity, after today´s three stages the crew of Paolo Pagni and Antonella Baldasseroni, on a Porsche 911, is leading. Thirty-three crews started this morning.

STATISTICS: THE MOST "HISTORIC" . . . CARS
The MG Mga of the Estonian crew Raivo Tamm - Raivo Tonismaa and the Porsche 356 A of the Italian-Austrian crew Kofler-Kofler are the "eldest" cars amongst those taking part in the 23rd edition of the Rally Elba Graffiti of sport regularity. The cars with competition numbers 239 and 241 were both built in the year 1958.

TOMORROW THE GRAND FINALE WITH THE MOVIE BY PIERO COMANDUCCI
The prizegiving, tomorrow at 20,00 in Piazza Giovanni da Verrazzano at Marina di Campo, will have the added value given by the movies by Piero Comanducci. The King of the Rally cameraman, has prepared a "special": a footage of his images of the Rallye Elba in the golden years of rallying, especially "tailored" for the occasion. "With a finale which will long be greeted", said this true icon of rallyes.

THE "LIVE REPORT" OF THE COMPETITION
Like last year, 2010 will also see the live web report of the event days. It will be possible to follow the rally in front of a computer, thanks to the cooperation with the www.rallyrevival.itc website which will insert he news together with the press room.
This is the link: http://www.rallyrevival.it/eventi-live-rally-elba-storico.