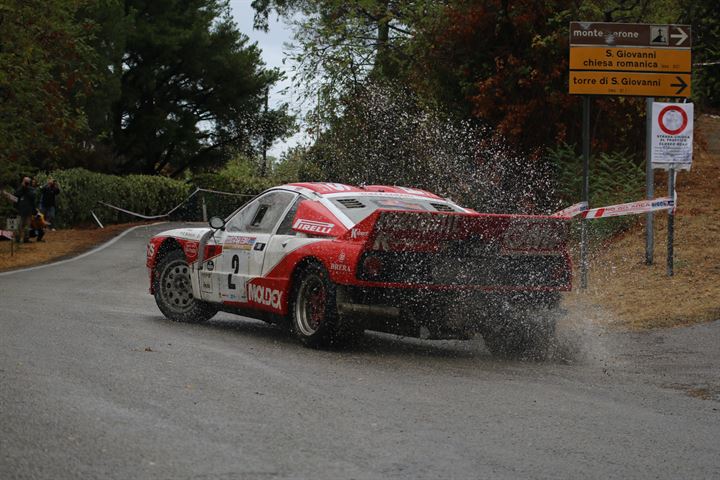 XXVIII Rallye Elba Storico-Trofeo Locman Italy: “european” victory for “Pedro”- Baldaccini
This success was only revealed with the last stage, delivered the fourth continental title for the crew.
Second overall Montini (Porsche) and third Comas (Lancia Stratos),
Also unfortunate "Lucky", Da Zanche and Guagliardo, all retired in the second leg.
The "Graffiti" has gone by Belgian Crucifix (Ford Anglia), the Regularity Sport for Ricci (A112 Abarth)

CAPOLIVERI (Isola d'Elba-Livorno), 17 settembre 2016 –
"Pedro" - Baldaccini, and the Lancia Rally 037, have won today the XXVIII Rallye Elba Storico - Trofeo Locman Italy, the penultimate round of the European and Italian Historic Rally Championships. The rest of the overall podium went to Montini-Belfiore (Porsche 911 RSR) to 1´46 "0, and the third is the F1 ex-driver Erik Comas, with Roche, with the fascinating Lancia Stratos, to 2´59"9.
Today, the final leg was very hot, with the dualism between "Pedro" and the Sicilian Salvatore Riolo, at his debut on Elba ways, with a Subaru Legacy. Both winners of the Elba Rally in the recent past, have dueled with strength in the four special stages remaining today, making wait until the last timed stage of the race, the "Cavo-Bagnaia", to declare the winner of this edition. The end of the Rallye Elba-Trofeo Locman Italy has been very "thrilling": when it seemed made with "Pedro" Riolo winner and silver medal for only 8 ´7, just the latter then had to raise the final flag in the transfer section to go on arrival, for clutch failure, a result of the rupture of one front axle in the last kilometers of the last race.
"Pedro," which also won the Category 4, in addition to winning the continental title for the fourth time, he had already completed the first stage in the lead yesterday despite 40 "penalty for a delay "paid "at a time control. Therefore, under the checkered flag, the second step of the overall podium went to Brescia Nicholas Montini, with the Belfiore, (Porsche 911 RSR notes), and rose the third French former F1 driver Erik Comas, the author of a remarkable performance , all in progressing with the Stratos.
Also unfortunate the other Sicilian Domenico Guagliardo (Porsche 911 SC RS gr. B), the winner of 2015, involved in an accident during the last “chrono” when he could sign another podium Elba, after a spectacular second half of the race. This day, as well as offering performance and adrenaline until the epilogue: the withdrawal of "Lucky" (PS 6) for engine problems of his Lancia Rally 037 and also Lucio Da Zanche (Porsche 911 RSR, after SS 6) retired this morning for mechanical problems too when running in ffth overall position.
In the Category 1, have largely won the Turin Parisi-D´Angelo, with their Porsche 911, in the Category 2 the victory went to Montini, in front of Comas, who has passed the final Siena´s Alberto Salvini (Porsche 911).
In the Category 3, won another Italian Marco Superti, with Dell´Acqua (Porsche 911 SC), in front of the Austrian Karl Wagner (Porsche 911 SC) and is Roberto Rimoldi (Porsche 911 SC).
Always spectacular, the A112 Trophy, today won again Cochis-Manganone winners with 9 "8 ahead of Sisani-Pollini and third Cavagnetto Gallio-15" 3. Cochis then he repeats his win yesterday and the other two have exchanged the final position relative to the first leg.

The FIA Trophy for Regularity Rallies, the XIX "Graffiti" - Trofeo Locman Italy, the sixth round of the continental season, was won by Belgian Crucifix-Lambert (Ford Anglia 1960), second are Schmitzek-Maier German (Lancia Delta Integrale 1988), with two penalties by the leaders. In the III Historic Regularity Sport has won Ricci-Biasci, with A112 Abarth 1976).
Complete rankings: https://goo.gl
cDzz2