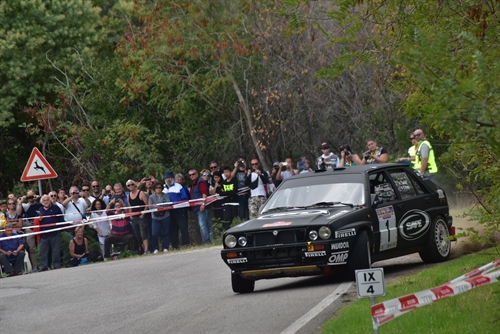 As usual, the Rallye Elba is an event designed for the territory of which promotes the image, communication and I also the economic fallout with emotional tourism, that brought to the island by the event itself. It is the most immediate example, last year, well twelve nations were represented by the crews in the race and about 10000 units was the attendance with various roles at the 2017 event.

The race, valid as seventh and penultimate appointment of both the European Rally Championship historical and Italian Championship, includes and the part of the famous "Elba Graffiti" of "average regularity", also with the National title. In addition, also the usual race of "sport regularity" and an exclusive rally Porsche, will take place.
As usual, the Rally Elba Storico will eligible for the Trofeo A112 Abarth, of which will be played the grand finale for 2018 with two legs that will be two races, for the Trofeo Michelin historic Cup and the memory Nino Fornaca.

Capoliveri always the heart of the race
Nothing modified, compared to the six previous editions, regarding the logistics of Rallye: The headquarters of the event is confirmed, at Capoliveri, at the functional and exclusive Hotel Elba International, exclusive position that admires the Gulf of Porto Azzurro, where will be organized the direction of race, the Secretariat and the press room.

Planned again three days of challenges, with a total of 9 special stages. In total the Rallye distance will be 417,63 kilometers, whose 32,40% is represented by the special tests which mark 135,33. Almost all the stages of this edition have the directions reversed compared to the past, for some of them it is just of unpublished versions for the historical Rallye, like the "Volterraio-Cavo" and the "Nisportino-Cavo". A race that "looks in the face" the crews: in this edition about 16 kilometers will be the average length of the special tests. That´s why the reconnaissance hours will stretch out.

The start of the race, always from Capoliveri, will take place at 19:00 Thursday, September 20 and reading the timetable immediately jumps to the eye the return to the origins of the spectacle stage of Capoliveri, in the version of 2011, wanted From the municipal administration (departure 21:55 after the Regrouping in Porto Azzurro). The first leg will definitely be ´tough´. On Thursdays, the challenges will be inaugurated by the "Due Colli" (km. 12,230), then the already described "Capoliveri" closes the first tranche of race. The next day, Friday, September 21, will begin even the challenges with the 22,350 kilometers of the famous "Due Mari", then step to the "Due Colli" (km. 11,230) and then return to the other, before closing the day at 14:40. It highlights the still distant fearsome live more and more to the competitors the island of Elba and its beauties, in a narrative way to unite in a concrete way sport and tourism, exploiting the pleasant and still long-days of September.

The 2017 edition of the race was won by the French Comas-Roche, on a Lancia Stratos. The rest of the podium was for "Lucky"-Pons (Lancia Delta 16v) and De Zanche-Luis (Porsche 911 RS).