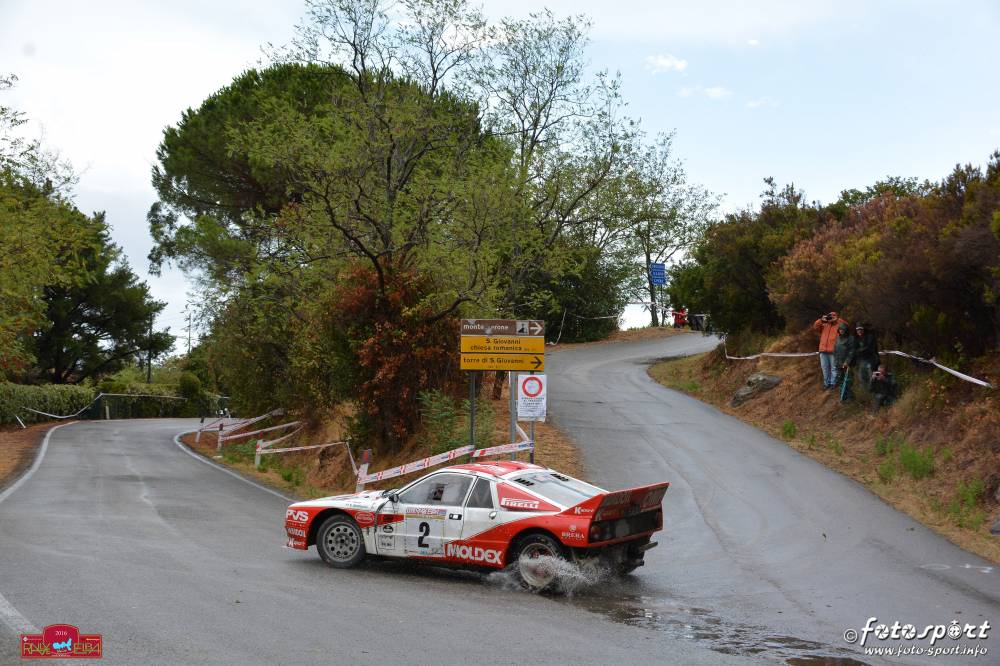 The XXIX Rallye Elba Storico-Trofeo Locman Italy is ready for challenges: 132 entries
This weekend, "the island of rallies" will revive the classic European and National challenge,full of technical-sports content of thickness.
13 entries more than 2016, with 12 nations represented by the crews in the race.
The best Italian and European interpreters of historic cars rallies are waiting, ready to duel on the streets of Myth.
Great also for the double challenge proposed by the Trofeo A112 Abarth.
Ten Special Stages scheduled, in a path designed for agonism but conceived both to make live better the island to the drivers and not to be too invasive in the territory.
Also scheduled a sport regularity event, indispensable appointment for regularity experts.

It is ready to take over, the XXIX Rallye Elba Storico - Trofeo Locman Italy, scheduled for this weekend in the unique scenery of the Elba Island, starting and arriving in Capoliveri.

There is great satisfaction in ACI Livorno Sport - organizer and promoter of the ACI Livorno event - which has enjoyed a great new success of entries (132 crews), well over 13 more than last year, with 12 nations represented, confirms the great love that the riders have for the Elba Island and its competition.

Valid as the seventh rally of the European Rally Championships and the penultimate of the Italian Championship, the event includes the opportunity to run the Regularity Sport Rally or an exclusive Porsche Meeting. There will also be valid for the Trofeo A112 Abarth, for the Michelin Cup and for the Fornaca Memory.

In the race, this year, there will be cars that have made the story of road races and the world´s automotive industry: from Porsche 911 to Lancia 037, Lancia Stratos to Lancia Delta, Ford Escort to Sierra, Talbot Sunbeam, the Audi Quattro, the various rally Fiat and many more.

THE SPORT SCENE REQUIRES TOPICS
In the continental context, many of the games are still open, but the results of the Elban appointment can assign some title.
In category 1 the Italian Antonio Parisi (Porsche 911) leads with a fair margin on his compatriot Carlo Fiorito (Porsche 911), and certainly the results in Elba could be decisive for the win of one of the two claimants.
Category 2 sees the French Eric Comas (Lancia Stratos) leading with a not too wide margin on the Finnish Ville Silvasti, so the transalpine on the island will have to make a full effort by exploiting the agility of the Queen car of the seventies and eighties rallies , but also beware of the danger, for both of them, who can come from Luciano Da Zanche (Porsche 911), one always been well inspired by Elba.
In Category 3 there is a duel between the Italian Maurizio Pagella (Porsche 911) and the other Finnish Pentti Veikkanen. They are close, certainly their dualism can produce a great show on the road.
Lucky (Lancia Delta 16V), in category 4, is largely leading on the Spanish Concueva, so it will be a formality, to acquire important points to get the title´s certainty.

The stories of the Italian Championship, on the other hand, will come to Elba with several question marks, after the end of August at the Rally Alpi Orientali. The titles of first and the second group could be decided on the island. Marco Dall´Acqua (Porsche 911) leads for five points this group on the paired Massimo Giuliani (Lancia Fulvia HF) and Antonio Parisi (Porsche 911), while in the second category Salvini (Porsche 911 Carrera), Bertinotti (Porsche 911) and Negri (Porsche 911) will play all for everything and Da Zanche, a little behind in the classificatoin, could be the balance needle. "Lucky" could grab the title in the fourth, looking for the fight, only for the second place, between Marco Bianchini and Elia Bossalini, being paired at 42 points after the Friuli rally. Finally, Rimoldi, Superti (both on Porsche 911) and Nerobutto (Opel Kadett GT/E), are separated between them only for 8 points in the third group.

THE HEART OF THE RACE WILL BE TAKEN TO THE CAPOLIVERI
With the broad consensus gained since 2011, when general logistics moved to Capoliveri, ACI Livorno Sport designed the 2017 edition, ready to consolidate the high quality offered in past editions. As a custom is an event that has been conceived for the whole island, just as its territory, but above all "for the territory", which favors the image, the communication and also the economic relapse with emotional tourism, Isolate from the event itself.

Nothing has changed compared to the previous four editions with regard to Rallye logistics: the Headquarters of the event is confirmed at Capoliveri at the functional and exclusive facilities of Hotel Elba International, exclusive location overlooking the Gulf of Porto Azzurro , where the Race Direction, the Secretariat and the Press Room will be organized.

THE PATH: TRADITION WITH SOME CHANGES
ACI Livorno Sport, has again scheduled three days of challenges, with a total of 10 Special Tests (134,000 kilometers of competitive, that is, 30% of the total distance - 446,580 km). They are "historical" trails, which have seen in more than one fascinating sporting event.

Much has been done to track the recent past, some changes have been made to comply with international standards, especially with regard to the tests to be carried out in the dark, but in any case going to the maximum permitted mileage, just to make the challenge as usually passionate and full of impressive sports technical ideas. Security is an indispensable topic, the organization has always shown great sensitivity to the theme and again this year reconfirms this factor at the highest levels.

A revamped look, however, but not too much, which will surely be appreciated by those who will run, who will have ahead of him a Rally ready to convey those vibrant feelings that it is possible to "hear" only a race on the Elban roads.

THE RACE PROGRAM
The Rallye Elba Storico will start in the evening of Thursday, September 21st: from 19.00, competitors will descend from the ramp in Capoliveri, Piazza Matteotti, and will immediately face up the "Due Colli" (12,290 km) and "Capoliveri" (Km 4,900), in the classic circuit in the town. Then, crews will enter the night regroupment from 22.00

The second day of the race, Friday 22 September, which will resume at 8.30, provides for four more specials, with a final day at 16.00, always in Capoliveri.

The next day, on Saturday, September 23, the big finals, with four more stretches: the challenges will start at 08.30 and the checkered flag, always in Capoliveri, will flutter from 14.00.

The timetables of each end of the two legs have been studied for this edition in order to make life more and more to the participants in Elba and its beauties, combining in a concrete way sports and tourism, exploiting the pleasant - and still long – september days.

THE PARTNERS AND THEIR SUPPORT TO THE RACE WITH PASSION
Locman Italy, Moby / Toremar, the Municipalities of Capoliveri, Marciana, Rio nell´Elba, Porto Azzurro, Rio nell´Elba, Rio Marina, Portoferraio, Campo Nell´Elba and Marciana Marina, in addition to Eni, Bardahl, Gigoni, Uliveto, Conad Nocentini Group, Acqua dell´Elba, Sales, Sara Assicurazioni, Bulky Soft, Autoparts, Banca Cras, 3A Barontini, Elba International Hotel and of course The Automobile Club Livorno also for the 2017 edition of the race will support the organization with their strong passion for the motorsport and in particular for the Rallye Elba Storico.