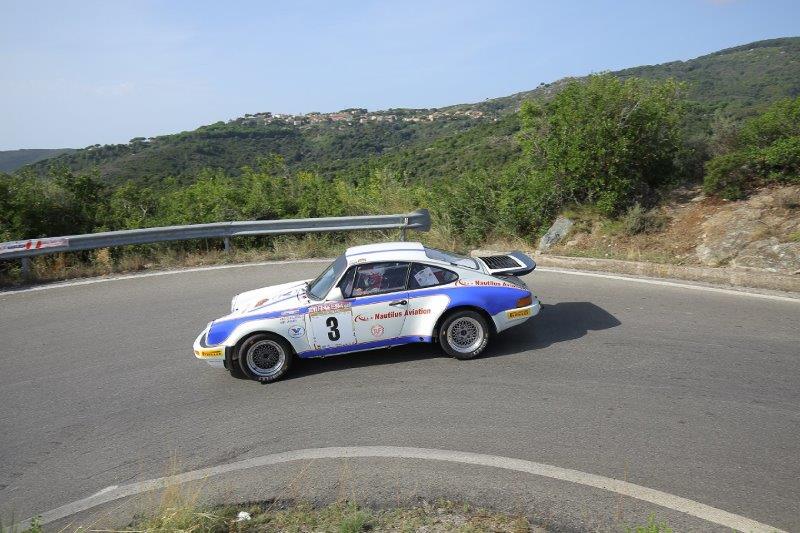 Guagliardo-Granata lead the Rallye Elba Storico, after the first leg
With their Porsche 911 Group B, the duo Sicilian cuts the finish line first stage. Seconds confirmed Lombard Montini-Belfiore, with a Porsche 911 Rsr Group 4 ahead of Lucky-Pons, the first among the "European" with the spear Delta Integrale.
Thanks to a very beautiful day the 123 competitors match themselves on the streets of the island, chasing the Trofeo Locman Italy

The Elba Island gives its best even at the Historic Rallye, welcoming participants subverting many of the negative omens of bad weather, the days of the vigil. It is a sunny day, not hot but pleasant and full of light and colors to allow many foreign sportsmen and women who have come to Capoliveri and surroundings to enjoy the beauties and local products.

One of excellence is just the Rallye Elba Storico and above the brainchild and labor of Elbans which is evident with the limited edition of the new watch Locman Italy, recently presented by the House of Elba and spread exclusive right during the event of the Automobile Club Livorno. Another sign of class, quality and elegance that has always characterized the production of the Elban brand
Guagliardo dominates, Montini junior chases, Lucky contains. The first leg of the Rally Elba Storico expressed its verdicts, but not the conclusions of a race that is compelling despite positions crystallized with important gaps. The driver of Palermo was the fastest in three of the five special stages of the first day of competition and took the lead immediately; Nicholas Montini confirms his sublime skills driving a more traditional Porsche 911 in second place overall, and first of category 2 moreover winning the spectacular and hard SS 2 "Capoliveri"; Lucky, back after months of inactivity, drove at his best the Lancia Delta Integrale with which leads the ranking of the European competition; It is a renewed Lucio Da Zanche to keep alive the fight for the podium.
After slightly touched in the Super Stage of Capoliveri, the driver from Valtellina launched the Porsche 911 rsr of the Piacenza Corse in the comeback that led him to close the leg in fourth place overall. Co-driven by Oberti, Da Zanche was the fastest in the second stage "Due Colli" and then mark some very good stage times that allow it to undermine the third place of "Lucky", chasing 3 "7.
Luca Ambrosoli, fifth overall and first of 3rd Category made an excellent race with Porsche 911 SC and co-driven by Silvio Stefanelli, while "Pedro", on a Lancia Delta with some tire problems, failing to close the gap due to the accused off the road in the second stage.
Montini senior and Zoanni are second in the 3rd Category, on their Porsche 911 Sc Piacenza Corse, just before, for four seconds and three, of Nodari-Franchini, on Porsche 911 SC Isola Vicentina to the first experience in Elban races.
Paolo Baggio is the second in the 4th Category ranking, with the Lancia Rally 037 Group B, while Federico Ormezzano leads the 2nd Category, driving the Lotus Talbot with his left hand bandaged and sore. Marco Superti is the leader of the first group, with Porsche 911 S, he precedes Isabella Bignardi, slipped to eighteenth place overall after losing precious time for a technical problem on her Porsche 911 SC, forcing her to slow the rush that could be in the top ranking.
Race 6 of the A112 Abarth Trophy ends with the victory by the cousins Alessandro and Francesca Nerobutto, played with the first leg of the Rally Elba Storico, offering a test of character after a close duel with Sisani-Mantovani, after four stages were perfectly dead-heat, resolved in their favor to 3 "9 only after the last SS. Third closed Gallio-Morino, more detached after losing ground for breaking the alternator which forced them to go to push the car in the final Parc fermé.

Tomorrow, Saturday 19 September, it will run the third day of competition, the seventh round of the Trofeo A112 Abarth, the grand finale, with an additional four timed sections: the challenges will start at 8.30 and the checkered flag, always in Capoliveri, will flown starting at 15.35.