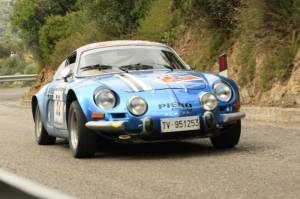 XXII Rallye Elba Storico-Trofeo Locman Italy: another success for Riolo (Porsche 911)
After a fierce fight with Da Zanche in the first leg, he stretched his lead in the second, while his rival retired due to an accident.
The driver from Sicily won Group 2, while Group 1 was won by Capsoni (Alpine A110) and Group 3 by Ambrosoli (Porsche). Pagni-Baldasseroni won the "Elba Graffiti" event of Sport Regularity.

Another success for Salvatore "Totò" Riolo, codriven by Loris Robba, in an event of the European and Italian Historic Rally Championship. Today the chequered flag was waved at the XXII Rallye Elba Storico-Trofeo Locman Italy, where the driver of the Scuderia Ateneo repeated his overall win of last year. The event counted as the eighth round of the European series, as well as being the eighth rally of the Italian ACI-CSAI series.

A "full attack" event by Riolo, who was in a duel for almost the entire first day with Lucio Da Zanche (Porsche 911), and then went in the lead yesterday evening. This morning his task was made easier by his opponents´ retirement due to an accident after hitting a safety rail in the second stage. From that moment onwards, seen his advantage, he cruised to the finish.

Behind the driver from Cerda (Palermo) a great battle took place, which saw Luigi Marchionni, together with Lizzi on a Porsche 911, turn out to be one of the most brilliant opponents. After setting the fourth time on the first stage of Thursday, he climbed to a great final result. Third overall went to another driver from Sicily, Marco Savioli (Porsche 911), another mature drive seeking the high ranks in the standings. The overall podium reflects the standings of Group 2, where another great performance came from Paolo Ciuffi, at his first "historic" experience with a Porsche 911. A difficult event for him, both to get used to the car and for the gearbox problems which hit him today, and despite which he managed to set the fastest time on the last stage. Norway´s Walter Jensen (Porsche) never shone, perhaps for a lack of feeling with the stages.

Group 1 was exciting, the final victory going to Luigi Capsoni, with the 1300 cc Renault Alpine A110. The fight for victory was between him, Angelo Parisi (id.) and Walter Pfeiffer, with a Porsche 911. The three finished in this order. Capsoni went into the lead two stages before the finish resisting to attacks from the other drivers, despite a hesitation in SS 11 when he "cut" a coirner and feared he had damaged the chassis, while Parisi can complain about the loss of pressure in a tyre in the same stage. Bad luck for Andrea Polli, with a Lotus Elan, slowed down on the last stage by a throttle cable failure.

Luca Ambrosoli won Group 3, who races both with "historics" and modern cars with good results. Starting from the fifth position, he climbed up the standings and went in the lead on stage 10 after the retirement of Giuseppe Alfonzo (Porsche), due to an engine failure. Third place ultimately went to Ernst Harrach, on his Mitsubishi Lancer, who beat Nicola Patuzzo (Porsche) on the very last stage. The latter ended his rally with a wrong tyre choice as well as the intercom issues. This group saw great performances from Piero Carissimi, with an Opel Kadett GTE, and of Bruno Bentivogli, Alfa Romeo GTV, while the rally spelt evil for Marco Raoul Domenicali, betrayed by his engine while he was making up time after suffering in the first day due to a throttle cable failure.

The Rallye Elba Storico also saw some important retirements, such as Stefanacci (clutch), Antonio Salvini, stopped with his Porsche 911 towards the end of Yesterday´s last stage with an engine failure, after suffering gearbox problems. Giovanni Galleni also retired yesterday after SS 5, for overheating problems at his Opel Ascona 400´s engine. Pierangelo Rossi, who was stopped yesterday by transmission problems, was back in competition this morning, posting some interesting stage times.

In the "Graffiti" sport regularity event, victory went to Paolo Pagni and Antonella Baldasseroni, with a Porsche 911.

The event enjoyed remarkable success, both on a media level as well as for the entries (123 crews, 86 of which for the Rally and 37 for the "Graffiti" for a total of fourteen nations).
The news of the stage "inside" the village of Capoliveri and a beautiful and challenging route, as it is traditionally in the island´s rally, where the bonuses of an ever unmissable rendez-vous in the European and Italian historic Rally series. The success of the event also went through the internet: the web report by rallyrevival.it, from Thursday evening to today had more than 45,000 unique viewers, going over 100,000 units taking into account the "refresh".