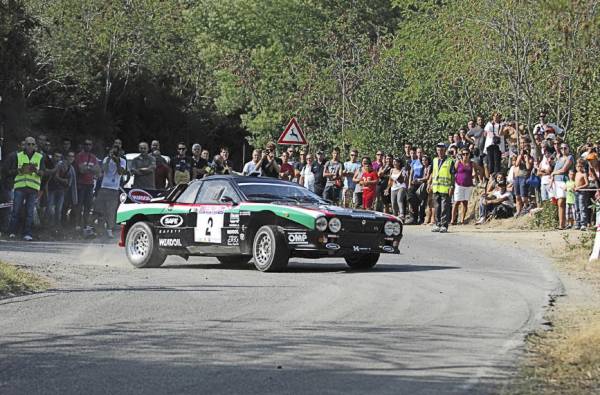 Marco Bianchini with Lancia Rally 037 first overall in the XXIII Rallye Elba Storico - Trofeo Locman Italy
The San Marino driver took the lead since the third special stage, then dominated vigorously the scene breaking the long string of victories of Porsche´s car that lasted without interruption since 2000.
Behind him Salvini arrived - first for the Italian Championship standing - and Ambrosoli, both at the start with a coupe of Stuttgart.

The XXIII Rallye Elba Storico - Trofeo Locman Italy, organized by ACI Livorno Sport and eligible for the seventh round of the European Historic Sporting Rally Championship and eighth of Italian specialties, was concluded in the afternoon today in Capoliveri.

The race, which this year changed its historic location from Marina di Campo to Capoliveri, has proposed a three-day challenges as usual, started Thursday night and ended today after fourteen Special Stages. Challenges that have crowned for the first time Marco Bianchini, the head of the Lancia Rally 037, car admitted at the start of the rally without gaining points for the European Championship standings.

Flanked by Emanuele Baldaccini, Bianchini had taken the lead in the third special stage, the first of yesterday, after starting the comparison with caution, and then be able to control the attacks came from several contenders, especially of Alberto Salvini and Marco Raoul Domenicali, both with a Porsche 911.

Today, behind Bianchini, has experienced a spectacular brawl with Salvini which managed to finish in second place overall as well as the first of the second group (cars from 1970 to 1975), despite the difficulties suffered in the middle of today´s duels for hitting a stone on the path during the tenth stage, a problem which caused him to finish the race with a sore shoulder. Salvini also suffered after the break of the arm of a suspension, which has even been able to firmly hold the overall second position, even with the satisfaction that he signed the victory in the Italian Championship standings.

Third final place for Luca Ambrosoli (Porsche 911), author of a spectacular duel today with Domenicali. The latter had closed the first step above the lowest rung of the podium, only to be surpassed during SS 11, the first round on Monte Perone, with the tires going into crisis. Ambrosoli, 9" finished ahead after last special stage, then won the third group (cars built from 1976 to 1981) just on the other, while the Enrico Brazzoli (Porsche 911), current leader of the European standing, constantly missed in the top ranking of his category , undoubtedly influenced by a penalty for yesterday delay "paid" to a Time Control. It was beautiful the final push in this category between Bruno Migliara (Opel Ascona 400), which was also penalized by a delay to a time control, against Roberto Montini (Porsche 911): the first has prevailed for only a second.

The first group (cars built before 1969) was conquered by Luigi Capsoni (Renault Alpine A110), which took the lead of the category from the third stage taking the testimony from Adriano Salvi (Porsche 911 S), who then stopped before the end of the race. Capsoni won on Finnish Tuomo Liukkonen (Ford Escort) and Luigi Zampaglione (Porsche) arrived third. The first two have thus continued their spectacular battle for the ranking of the continental standing.

The second group was won, as already mentioned, by Alberto Salvini ahead Piero Carissimi (Porsche 911) in second place, after a very good performance as he was weakened by a nasty flu. Czech Janota was third in the category, so he went to the podium with his Opel Kadett GT/E, strengthening its leadership on continental standing over Antonio Parisi (Porsche 911), arrived just behind in the final classification.

We just had real show in this rally, of course with the special stage on Thursday night in Capoliveri, attended by thousands of people, with especially thanks to driver "Pedro", who did not grab points for the championships standings as his Rally Lancia 037 is not eligible for, with which he finished fifth in the general good, for discriminating.

Among the Elban crews, always acclaimed by the warm local public, Gianotti-Bonanno (Porsche 911) have prevailed, in the eighteenth overall and eleventh in the third group.

Several main withdrawals, from that one of Da Zanche, after the first special stage on Thursday evening for an engine failure on his Porsche 911, to those of Mauritius Plano (Porsche 911, that was readmitted today to the second leg with "Catching up", then with a penalty) and the Norwegian Walter Jensen (Lancia Rally 037) both left the road, the young Nicholas Montini (Opel Kadett GTE- broken drive shaft), Giovanni Galleni (Opel Ascona 400 - transmission along the fourth round) and the Roberto Bigoni (Talbot Lotus), with mechanical problems.

For lovers of statistics, at the Rallye Elba Storico it was interrupted a long series of successes by Porsche´s cars (since 2000), while the legendary Lancia Rally returned to the victory on the island after 26 years since the last success by Dario Cerrato with Jolly Club (1985).