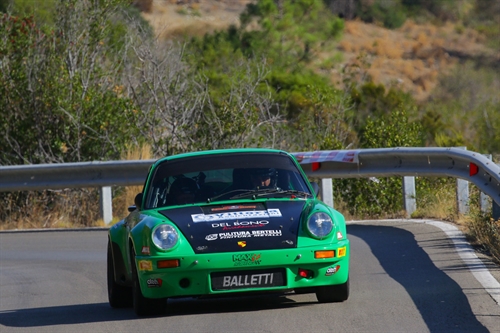 The tuscan driver, codrivered by Davide Tagliaferri, won his fifthtime in this race, also winning the 2nd Group.
Second place for Zanche-De Luis (Porsche), and third the local crew Volpi-Maffoni, at their debut with the Lancia Delta Integrale.
"Zippo" -Arena (Audi Quattro) sign the best performance among the FIA EHRSC.

Capoliveri (Isola d' Elba, Livorno-ITALY ), 21 September 2019 - Fifth satisfaction, at the Rallye Elba Storico-Trofeo Locman Italy, for the tuscan crew from Siena Alberto Salvini and Davide Tagliaferri on a Porsche 911 Sc, which won today XXXI edition of the race, penultimate race of the Italian series (CIRAS), as well as of the European Championship (FIA EHRSC).

The success of the tuscan couple matured in the final part of the race, managing to stand up to Lucio Da Zanche, paired with Daniele De Luis, in a spectacular second leg. Salvini had concluded the first portion of the race (run between the evening of Thursday and Friday) at the command with a little advantage, cleared precisely by Da Zanche at the start of the day today, after a race start suffered for bad tire choices.

The final part of the rally, today, Salvini and Da Zanche made a spectacular dualism and then the tuscan excelled for only 5 "2, also winning the second group, with a decisive attack on the last stage.

For Da Zanche great second final position winning the fourth group, confirming the excellent feeling with the Elban ways, and the local Andrea Volpi, with Maffoni, at their debut on a Lancia Delta integrale closed the race third overall with distinguished themselves against different specialists of the historical races.

Fourth place, the Sicilian friend of Elba "Totò" Riolo, this time starting with a Ford Sierra Cosworth. At the end of a rather troubled race due to various mechanical problems, and
The top five completed by another Sicilian, Angelo Lombardo from Cefalù, with Giuseppe Livecchi on a Porsche 911 Sc, winners the third group in front of Andrea Andrea " Zippo ”Zivian, with Nicola Arena, on an Audi Quattro. “Zippo” only ran in a "continental" perspective (after the bad race in Alpi Orientali), controlling the competitors' for the EHRSC, especially the Finns Peltonen (the leader of the grouping in Europe, with a Toyota Starlet) and Veikkanen (Porsche 911) as well as the Austrian Wagner (Porsche), heavily delayed from the first leg of the race by mechanical problems.

The first group was won from Dall'Acqua-Galli and their Porsche 911. Second position for the continental leaders (as well as "tricolor") Antonio Parisi-Giuseppe D'Angelo, that with this performance have celebrated in this occasion the European category title.

The A112 Abarth Yokohama Trophy, after the stage 1 victory went to the Championship leader Scalabrin, stage 2 saw the same driver sign the victory.

Important retirements: "Lucky" stopped in the first leg by engine problems when he was fighting for the lead, the other Siena driver Pierangioli (Ford Sierra Cosworth) for transmission break (SS3), Federico Ormezzano (Talbot Lotus), due to mechanical problems) and also to the other acclaimed local Francesco Bettini (Lancia Delta integral), leader in SS 1 and 2 stopped by the gearbox. Stop also for the Finnish Myrsell (Porsche) at the start of the second leg.